Please Note: This version of the video begins with Sangeet giving her “Insights about this Meditation” followed by "Tuning In" with the "Adi Mantra", then the "Isht Sodhana Mantra Kriya" meditation (about 11 minutes) and concludes with the "Longtime Sunshine" song.

TAP for the “Complete Practice” Version of this Video

TAP for the “Meditation Only” Version of this Video

This is a great meditation to do when your prayers really need to work for you. Doing this, you become your prayer. Your radiance of compassion and heart-centered presence truly work on your behalf!

The three phrases you chant describe and awaken your Divine place in the Universe as an infinite soul in a finite form, living on finite Earth. It brings the Earth and the Heavens together with the compassionate heart center of the great “master of miracles” Guru Ram Das. Described below, the visualizations and hand/arm movements deeply activate your enlightened self-realization.

Yogi Bhajan loved this mantra. He told us

“My dear ones, you want your prayers to be effective.

You want your ultimate destiny to manifest.

This kriya can do it.

I know there are thousands of kriyas that we do, but it just takes one done well and this is the one for isht sodhana to manifest.”

The form of this chant is both a declaration and a salutation (as in “I salute”) and the realization of Divine Self emerges.

This meditation can also give you the frequency to manifest your intentions, directed by your intuition as a sadhu. To obtain such a power (classically known as a Siddhi), do the meditation at sunset for 31 minutes for 40, 90, 120 days.

The instructions for doing this meditation are simple:

Drishti and Pranayam: Eyes focus on the tip of the nose throughout. Let the breath adjust itself as you chant.

Earth Is!
The Heavens Are!
Guru Ram Das Is! 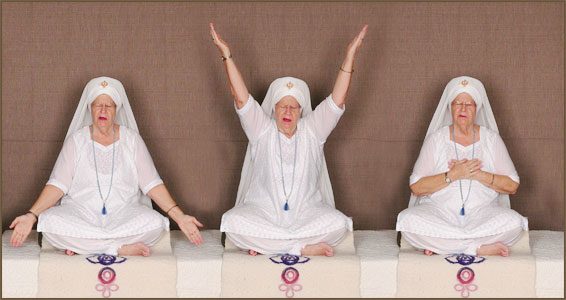 Dharti Hai  Visualize from your navel down a soft gray blanket, the dust of the Earth on which the feet of saints have walked. Your arms and hands are straight, angled downward by your sides.

Akash Hai  See from your eyebrows up the bright rich blue of the Heavens, vast and unlimited. Your arms and hands sweep upward to 60 degrees, palms facing each other.

Guru Ram Das Hai  Bend your arms and bring them inward to fold hands over your heart, with the left hand under. Visualize and bask in the great white light of this compassionate master, Guru Ram Das. Let that light penetrate both the gray and the blue.

While doing this, hold the visualization of all aspects – the gray, the blue and the pure white light. Immerse yourself in the chant. 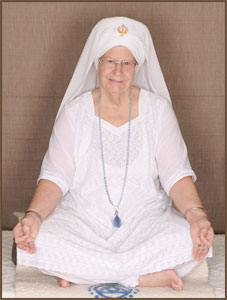 Optional Mudra: While this series of moving mudras was taught originally at a Summer Solstice Yoga Festival as directed by Yogi Bhajan, it has also been given with Gyan Mudra, hands resting on the knees with the tips of both thumbs and index fingers touching in little circles.

Here's How To Do It:

1. Sitting in Easy Pose or a chair, chant the Adi Mantra (the “Tuning In” mantra) three times.

2. Chant the mantra setting a pace of about 12 seconds for each recitation. (Visualization and arm movements are described above.)

Repeat inhale-hold-exhale once more with raised arms. Then lower your arms to your lap/knees and sit quietly.

Feel the vibrations of the mantra in you and around you.

4. Finish by singing the “Longtime Sunshine” song followed by a “Long Sat Nam.”

This web page you are looking at has the “Complete Practice with Intro Talk” version of the video and is a good place to start if this is your first time with this meditation. Sangeet begins by giving her insights about this meditation followed by “Tuning In” with the “Adi Mantra”, then the “Isht Sodhana Mantra Kriya” meditation (about 11 minutes) and concludes with the “Longtime Sunshine” song.

The page with the “Complete Practice” version of the video is intended to be used as a complete self-contained Kundalini Yoga practice since it begins with “Tuning In”, followed by the “Isht Sodhana Mantra Kriya” meditation (about 11 minutes), and then concludes with the “Longtime Sunshine Song.”

The page with the “Meditation Only” version of the video is intended for adding to your existing practice since it is just the 11 minute meditation.

Sangeet's original Blog Post on this meditation is HERE.